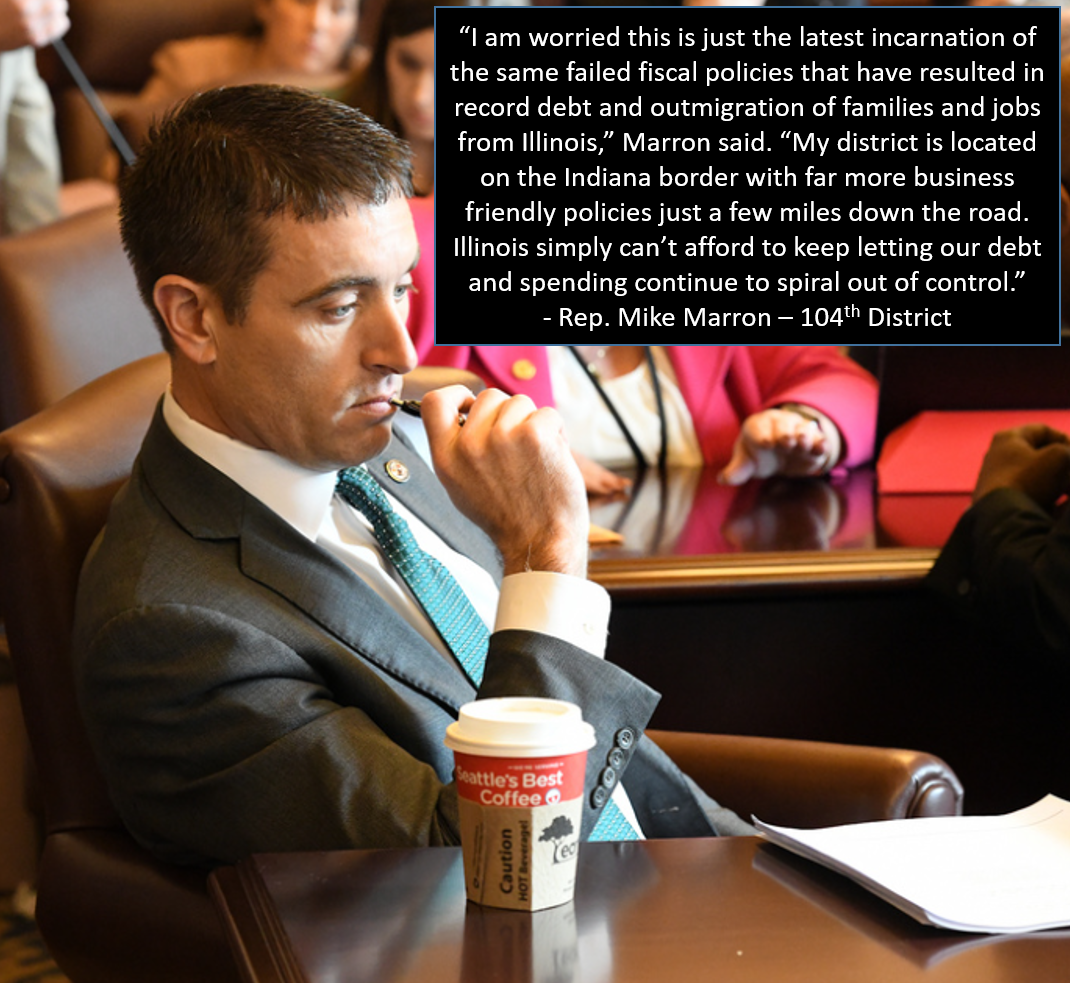 Springfield…. State Representative Mike Marron (R-Fithian) offered mixed reviews on Gov. Pritzker’s combined State of the State and Budget Address on Wednesday. On the bright side, Marron says he was encouraged by the Governor’s proposed increases in funding for both Pre-K -12 and higher education.

“Education funding is a huge priority for our area, from primary and secondary education to institutions like the U of I, Parkland, and Danville Area Community College,” Marron said. “The reason we can even think about devoting that much revenue to our schools is because House Republicans helped support and pass the education funding reform bill last year.”

“I am worried this is just the latest incarnation of the same failed fiscal policies that have resulted in record debt and outmigration of families and jobs from Illinois,” Marron said. “My district is located on the Indiana border with far more business friendly policies just a few miles down the road. Illinois simply can’t afford to keep letting our debt and spending continue to spiral out of control.”

“This was a speech based on keeping campaign promises instead of dealing with the fiscal realities of this state,” said Marron. “The budget proposal is unbalanced, and relies on new revenue streams that will require major policy changes to accomplish, items like legalized online sports betting and legalized recreational marijuana,” said Marron.

“The Governor is projecting more than $1 billion increase in expected revenues. That is an overly optimistic outlook for a state that lost 45,000 residents last year and passed a $15 minimum wage tax hike,” said Marron.

Marron argues that the State of Illinois must take responsible action to strengthen the pension system and to relieve the long-term budgetary stress on the state.

“We can’t rely on more borrowing, pseudo-pension holidays, and extending the 90% funding ramp, which just kicks the can further down the road,” said Marron. “In fact, these are the same pension gimmicks that Gov. Blagojevich relied on for his phony budgets for years and it would be a mistake to return to those practices.”

Marron was not surprised that Prtizker used the annual speech to kick off what is likely to be a two-year campaign to get a Constitutional Amendment on the ballot that would allow for a progressive income tax hike.

“The House Republicans believe $38.5 billion is more than enough to run the State of Illinois,” Marron said. “Instead of expanding social programs with shaky revenue gimmicks and relying on phantom revenue estimates on things like legalized marijuana and sports betting, I believe any new spending should be directed to our pension systems and to pay down our backlog of bills,” said Marron.