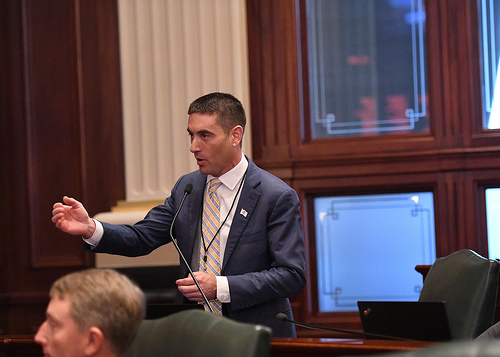 After the hustle and bustle of Springfield and trying to figure out the pros and cons of the big policy changes being thrown at us, it is always refreshing to get back and talk to the hard-working people of the 104th district.  I spent Friday working in Danville on my constituent services and went over to Rantoul on Saturday to meet up with local elected officials. We hosted a coffee and Conversation event at the Rantoul Public Library, where we discussed the ramifications of the $15/hour minimum wage and my expectations on what else is to come down the pike in Springfield.  I am grateful to my friends, the Reverend Frank McCullough Jr. and Rantoul Village Board Trustee, Sam Hall, for organizing the event.

In this job, having conversations with concerned citizens is priceless.  My number one priority in running for this position has always been to represent my constituents, and I will always make it my mission to seek out as much feedback as possible from the people of the 104th district as I work through my decision-making process.  I greatly appreciate the time everyone took to come out and visit.

Two major concerns I keep hearing about in district is the financial health of the State and the condition of local infrastructure. These are two issues that I am very passionate about and have filed bills this year to try to help our local communities keep vital water infrastructure viable and safe.

We, also, discussed the legalization of marijuana as this was a major area of future revenue in Gov. Pritzker’s proposal.  I am looking to keep this conversation going and to get as much feedback from the community as possible, which will be of great help during the decision-making process soon to come.

Springfield was very busy this week. I spent significant time preparing for and analyzing any preliminary information from the Governor’s Budget Address.  It was very important to get a head start on this process, so I could be as prepared as possible for the policy decisions the Governor is proposing. The later part of the week was spent analyzing what the Governor said in his speech and what it means going forward.

I am an optimist, but I philosophically disagree with the Governor and his approach on fixing our disastrous fiscal climate. However, I am trying to give him the benefit of the doubt because I acknowledge that the State of Illinois has many huge problems created by decades of mismanagement. I believe he thinks he is doing what is best for our State and we all know there are no easy answers to fixing Illinois.

In that spirit, I will start where I think there is some agreement.  I was very happy to see that the Governor put education funding as a top tier priority.  A good education is the foundation for future success, and it is critical to our success and our economic prosperity that we adequately fund K-12 schools and Pre-K programs. The Governor has also proposed a 5% increase from last year for higher education. I am very proud to represent folks that both work and go to DACC, Parkland, and the U of I. Higher-ed institutions act as great economic engines for our communities. They offer good paying jobs and an excellent educational experience and they all have their own strengths. I am quite interested in any ideas that the Governor has as far as training the workforce of tomorrow. Increased investment in vocational education is greatly needed in our state to help people that want to work to find better paying jobs right out of school.

There are many areas of the Governor’s plan that greatly worry me. The revenue estimates may be too exceedingly optimistic.  Many projections for revenue are based on revenue streams that have not even happened yet and may not be stable resources. The legalization of marijuana and sports betting are two major lynch pins in Gov. Pritzker’s budget, which are two very contentious issues in the State House.

The Governor spent significant time during his speech explaining why Illinois will need a graduated income tax.

This additional tax fits nicely with the ‘disastrous tax, borrow and spend’ policy that has gotten us into our giant fiscal mess in the first place. The progressive income tax would require a Constitutional Amendment that will be difficult to accomplish even with the Democratic super-majority.

In addition, the Governor offered no specifics on rates or what income levels will be affected.  I will NOT support any proposal that increases taxes for middle and lower-income levels, which the Governor would likely have to do in order to generate the revenues he needs for this budget.

Another area of concern is the message we are sending to business owners.  The business climate is already poor, and we are finding it difficult to compete with our neighboring states.  This tax proposal along with the 83% minimum wage tax hike on business owners will likely cause more businesses to leave.  If people continue to flee Illinois, any tax increase will further erode our tax base and have a counterproductive effect.

The pension problem is something that must be dealt with in order to guarantee the sustainability of the system and keep promises that we have made to people who have paid into the system.

The Governor is proposing to refinance the pension debt by kicking the can further down the road to our children.  This would increase the number of years it will take us to become fully funded in order to lower the payment in the short term. This approach would increase the interest on the debt exponentially and cost more tax dollars in the long run.  The better approach would be to make cuts in other areas to bolster a short-term infusion of capital into the pension system.   By doing this, the interest on the money paid into the system would begin working now, lowering costs both long and short term.  Although the Governor was short on details in his address, I am confident cuts can be found to reduce redundant and inefficient programs.

We’ve got to get leaner and smarter and we must stop going back to the people of Illinois for more money.

There will be times where I will find common ground with my friends on the Democratic side, and I look forward to working with them when those times come around.  When we don’t agree, I will do my best to spread the word back home with reasoned arguments. I always intend to offer viable alternative solutions to the challenges in front of us.  All of us elected officials owe that much to the voters of this State.  Thank you, for the great input and your help as we keep working to give Illinois a brighter future.