Rep. Marron honors “Women of Wisdom” from his District 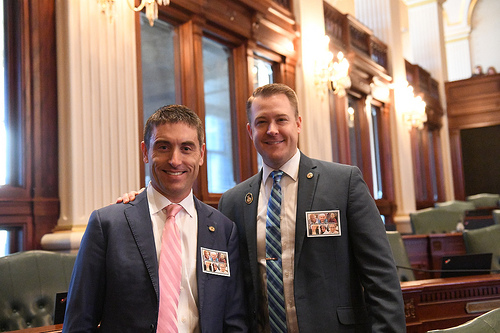 This week the Health Care Council of Illinois began an outreach program called “Women of Wisdom” to recognize Illinois’ oldest female nursing home residents. I want to extend a thank you to all of our “Woman of Wisdom” for their wonderful contributions to our communities and the great state of Illinois!

I signed on as a cosponsor to House Resolution 215 (Mayfield-Hammond), which was presented on the House floor yesterday. I wore a button, provided by the HCCIL, with the photos of three wonderful constituents at nursing homes in my district. I want to honor and say hello to Uva from the Colonial Manor home in Danville, Regina from the Country Health home in Gifford, and Esther from the Care Center home in Danville.

Uva has lived at Colonial Manor for 12 years. She grew up being involved in the church and singing in the choir. At one time, Uva sang on a radio station program, The Heavenly Glory Back Home Hour, for her church with her sister, Mary. Uva went on to teach piano lessons from her home later in life. Uva had five children, and she was a stay-at-home mom. Later, she worked at the Fannie Mae candy factory and as a receptionist at a dentist office in Danville. Uva is an avid reader, loves snacks and to “people watch”.  She often compliments Colonial Manor staff on their outfits, and she loves to give and receive hugs daily.

Regina was born and raised in the Gifford countryside. She and her late husband were passionate about their farming operation, where she helped her husband work the fields. She and her husband were dedicated members of St. John’s Lutheran Church of Royal. She was also an active member of Home Extension and enjoyed their monthly gatherings.

Esther was born in a very small town in Illinois and shared that she has not ever heard of that town again. She grew up in Aroma Park, Illinois and spent a lot of time at the ice cream parlor as a child. She met and married her husband when she was very young. He was French and worked at a carnival that was passing through Aroma Park. He left the carnival and started work delivering ice. They were very happy together for 38 years before he passed away.

Esther has three children Judy, Carol, and Donald plus 14 grandchildren and 14 great-grandchildren. She said she gave her children plain names because of her husband’s difficult to pronounce name. She said years down the road, her son-in -law, Jim said at a family gathering (which Esther boasts she never hosted a single one of) “You were not much of a Mom” Esther said, “Well that needs explaining.” Jim said, “Well, you never had fancy meals like these, but you were always running around with the kids.” He was joking, of course, Esther shared. But she did admit she and her children played hopscotch, jump rope, rode horses, and spent time at ice cream parlor. Esther ended our conversation by saying, “I just unplug the washer and away we’d go.” She was truly a great mother who raised wonderful children.