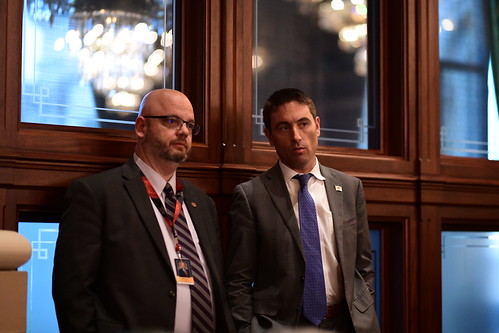 I wrapped up last week in Rantoul meeting with several great service agencies.  The day began at Cultivators Kids Club, which is an all-encompassing place for kids.  It serves as a daycare, youth center, provides transportation, and holds a monthly food bank for the community.  It is a strong faith-based organization run by Nelson Cuevas and is doing great work in the community.

The second stop was at Hope Meadows, which is an intergenerational Housing Community.  Hope Meadows is an innovative model that utilizes the vacated housing properties left unused when Chanute Air Force base closed. Hope Meadows builds supportive communities for families that are adopting and fostering children who are supported by retirees.  The retirees are likewise looking for the support of a younger family that are missing in their life for various reasons.  Hank Gamel has been an effective leader, who has even built a partnership with Rantoul High School. I love visiting Rantoul, and I learn something new every time I come to town.

I was back in Springfield this week, where we primarily focused on committee work. I am starting to see many Senate bills moving in several of my committees: Energy and Environment, Human Services, and Higher Education.  Next week is the committee deadline to move Senate bills that passed their chamber over to the House to be considered by us.

The big news of the week of course was Governor Pritzker’s initiative to put a constitutional amendment on the ballot for a Graduated Income Tax passing through the Senate on a party line vote.  As previously stated, I have severe concerns on this proposal.  I feel it is irresponsible for lawmakers to go back to the public to ask for more money until we fix our spending problem.  The structural spending deficit needs addressed, or we will continue to perpetually find ourselves in this situation.  We owe it to the State and our kids to fix this problem for real before we implement new taxes.  I intend to be a loud and clear voice for the 104th District when the Constitutional Amendment comes in front of the House.

On Thursday morning, I had the honor of welcoming my good friend and successor as the Vermilion County Board Chairman, Larry Baughn, to Springfield.  Chairman Baughn testified about the need for a Danville casino in front of the House Executive Committee.  The Chairman laid out a compelling case for why a casino is critical to the economy of Danville and Vermilion County.  As Sports Betting and Gaming comes in front of the General Assembly this month, I will be pushing hard for Danville to be included in the bill.  The Chairman eloquently stated that talk about a Danville casino has gone on far too long.  The first time the idea was proposed in 1986, Tony Danza was starring on the sitcom Who’s the Boss.  It is time to get this done.

It was a short week legislatively and will probably be the last such week before we adjourn for the summer.  Things will be heating up next week as we begin to act on Senate legislation and the Governor begins to move his big-ticket items.  The next month will be challenging for our State.  Always know that I will be doing my very best to represent you as these big items come up.