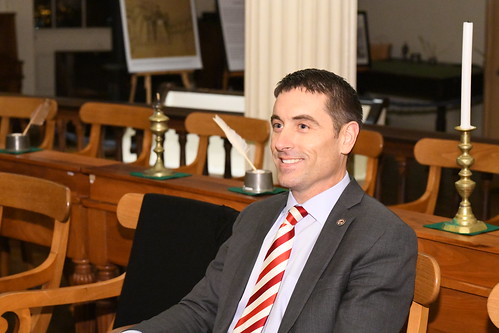 The clock is ticking quickly toward the House’s scheduled adjournment deadline of May 31, yet this was another week in Springfield where nothing happened on the floor of the House. We accomplished some work in committees, but even that has slowed with the imposed legislative deadlines. The Governor’s big-ticket proposals are being negotiated behind closed doors, there has been no appreciable work done on a budget for FY 2020, and almost no Senate legislation has moved in the House.

Two weeks from today will be the deadline for a budget, and we will be in overtime session if there is no agreement.  After May 31, a two-thirds majority vote in both the House and Senate is required to pass the budget. It is hard to justify all of us receiving payment for being back here in June, when we have not done anything of significance in the House to this point during the entire month of May.

I am sure that there are high level talks happening behind the scenes that I am not privy to, but this all seems like a horribly inefficient way to handle the people’s business.  This is not transparent and is indicative of the problems with our State Government.

The people of Illinois deserve a heck of a lot more than this model of inefficient and ineffective government. This process insults the citizens who expect the affairs of the State to be conducted in a timely, transparent manner. Illinoisans deserve the opportunity to observe and comment on legislation before a vote happens in the House. Instead, everything big is going to happen at the last minute. Springfield has to change its ways and we need to work together toward that goal.

One big development this week was the passage of SB 9 through the Energy and Environment Committee.  SB 9, the Coal Ash Pollution Prevention Act, is a bill that Senator Scott Bennett passed through the Senate after working extremely hard to come up with an acceptable compromise between business and environmental groups. The bill allows freedom of operation, but still holds companies accountable for cleaning the by-product of coal fired power generation: coal ash.  Rep. Ammons is carrying the bill in the House and I was proud to sign on as the chief co-sponsor.

The bill will require the clean up of coal ash at the Vermilion Power site along the Middle Fork River and will prevent any situations like this in the future.  I was pleased to have an opportunity to speak in favor of the bill during the Committee meeting to provide the local perspective on the issue. Vistra Energy should clean up the 3.3 million cubic yards of coal ash they have left along the banks of the Middlefork River, and I need to make sure my residents are not on the financial hook for this issue.

On a personal note, I have spent many years of my life canoeing the river, fishing off its banks, and riding horses on the trails in the surrounding parks. These parks were an oasis for my brothers, cousins, and I to get in various kinds of childhood mischief that worried our parents sick. My time spent on the river is the reason for my passion for exploration and my love of the outdoors.  The River is an ecological treasure and is the only National Wild and Scenic River in the State of Illinois.

Kickapoo State Park, Kennekuk Cove County Park, and the State Middlefork Park all reside along its banks becoming a destination for people from all over the Midwest, which creates a significant economic role to our communities.  Vermilion County brings in countless tourist dollars from people riding the horse trails at the Middlefork, fishing tournaments at Kennekuk, or enjoying the State’s finest Mountain bike trails at Kickapoo.  The River is vital to the City of Danville’s downtown revitalization plan, the focal point being the riverfront development project.  Our area has struggled with economic challenges since the GM Foundry closed its doors 30 years ago, so we must protect this important piece of the future economic revitalization.

This coal ash issue is wrought with some serious environmental concerns, both long and short term.  In the short term, there are serious and real considerations about how leaking coal ash into the river is affecting aquatic life and more importantly water quality with our drinking water safety in the area. In the long run, the danger could lead to a catastrophic spill of coal ash into the river.  No one knows when Mother Nature will erode the bank of the river enough to cause this to happen, but a disaster looms if the ash remains in place.  Whether it is next year or 500 years from now, we can’t take a risk of that happening to the Middlefork. The taxpayers of Vermilion County and the State of Illinois should not be on the hook for dealing with the mess.  I look forward to articulating these points on the floor of the House when it comes up for a vote in the coming weeks.

In this job, I have experienced a flurry of contradictory emotions.  I am proud of work like the passage of SB 9, while at the same time frustrated at the inefficiency of the legislative process. I am happy to be a voice in Springfield for our District, however I really miss home.  I enjoy finding common ground where I can with my colleagues across the aisle, but it maddens me when certain common-sense measures are mired in overt political games.

The system needs fixed.  It has been a struggle to navigate it all, but I will continue to give you my best effort.  The most rewarding part of the job is hearing from constituents back home.  Those conversations keep me on task and reinforce the importance of the work at hand.  I appreciate all of you and your efforts to keep me informed.  My spirits are kept high because of you folks back home that care about this State and our future. For now, I am ready to saddle in on the farm and ride my new horse before coming back for a marathon two weeks in Springfield. Thank you for keeping my spirits up!