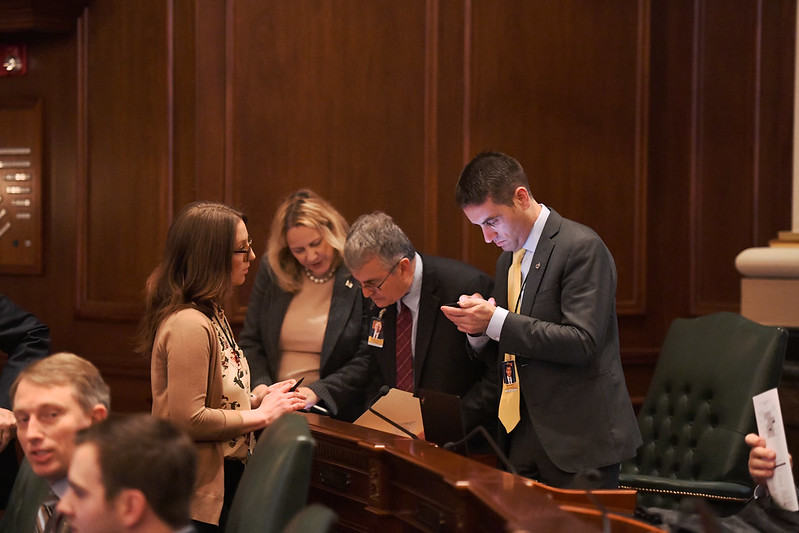 Legislation started to move in Springfield this week.  We voted on several bills on the floor that went through committee last week.  Some legislative ideas are good, others not so much.

I voted “No” on a bill this week that went through our Transportation committee that doubled the yearly allocation of money from the Capital Bill for construction of bike paths from $25 million dollars a year to $50 million dollars a year. The bill proposed to use revenue from the road fund to make up the increase.  Despite the Constitutional requirement that road funds be used for transportation, this is allowed because bike paths are considered transportation.  Justification for this was given by the majority by claiming that this was the original agreement during the Capital Bill discussions and that there was a mistake in the drafting of the bill.  Amazingly enough, our members that were involved in the Capital Bill negotiations remember no such agreement.

Don’t get me wrong, I love bike paths.  I use bike paths.  I’ve been an avid supporter of the Kickapoo Rail Trail locally and think it will bring great benefits to Champaign and Vermilion Counties.  In this circumstance, my decision is about fiscal responsibility.  When you have limited funds, you must make priorities.  Growing up, my parents instilled the idea of “the value of a dollar’ to me by having me make a wants and a needs list.  Needs are priorities, things we need to survive and function, which are the priority to fund first.  The desire to want something is a luxury.  Luxuries are funded after your needs are taken care of and this extra money is available to be spent to enhance life experience.

Safe and well-constructed roads and bridges are a need for a successful state economy that relies on a modern transportation system.  It is a prerequisite for a State at the crossroads of American Commerce.  Bike paths that offer an alternative form of transport to a select group is a want and an enhancement that can wait for days when the bank statement looks better.

It also concerned me when the lobbyist pushing for passage of the bill referred to $25 million dollars as a mere rounding error in the State Budget.  It was a shockingly cavalier attitude about an amount of money that anywhere I’ve ever been was considered a significant amount.  Putting wants ahead of needs and throwing around millions of dollars as if it is insignificant are the same practices that brought our sorry situation in the first place. We need to learn from our past costly mistakes and take steps in a smarter, more money conscious manner.

I am committed to press for answers on the FOID card situation and figure out how this came to be.  The unbelievable backlog for my constituents is starting to hamper us getting our business done in the office.  The sad part of all of this continues to be that not only is the State meddling with law-abiding gun owners, but they are also increasing the likelihood that a tragedy happens by rending what is a faulty system completely ineffective.  If the State can’t properly manage the FOID card system, it needs to be abolished.  I will talk about this every week and continue to demand answers until this serious issue gets addressed.