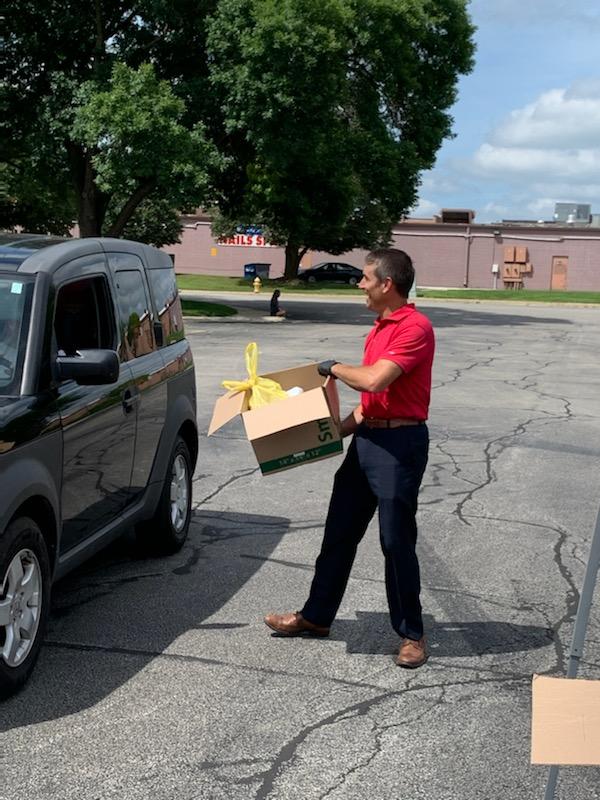 This was a busy news week for many reasons. I won’t even get into the Presidential political news, because there is too much State of Illinois business to cover.

This week I’ve got my reaction to these stories and more:

Prescription Drug Drop Off Events in Rantoul and Danville a Great Success!

Thank you to the Rantoul and Danville police departments for joining with me to host two prescription drug drop off events this past Tuesday! We had a great time seeing friends from across the 104th district and providing a free service to help folks dispose of unused/unwanted prescription drugs. Throwing them away or flushing them down the toilet seriously compromises the cleanliness and safety of the water supply!

Thank you to my constituents and again to the Rantoul and Danville police departments for helping make these events so successful. We’ll see you again next year!

For weeks, President Trump has offered to send the National Guard in to Chicago to secure the streets, end the violence, and protect people and property.

House Republican Leader Jim Durkin joined the President’s call to send in the National Guard in a statement released early Monday morning. I completely agree with President Trump and Leader Durkin. The time to bring in the National Guard has long past. It is time to secure Chicago and restore the city back to one of national prominence.

CHICAGO, IL… Illinois House Republican Leader Jim Durkin (R-Western Springs) released the following statement on the looting, rioting and violence that has occurred in the city of Chicago:“Once again, Illinois government has failed to protect its residents and businesses. It is time to bring in the National Guard and accept any and all federal assistance to stop the chaos that is destroying our state. No more excuses. No more failures.”

The first meeting of the Joint Committee on Administrative Rules since May was held in Springfield on Tuesday. At the end of the legislative Session, many of you reached out to my office to express your concern a rule proposed by Gov. Pritzker that would have levied harsh penalties against business owners found to be out of compliance the the Governor’s rules.

Your advocacy ensured the defeat of that overreach. But, the Governor was back at it this week in JCAR. His lead counsel was on hand to answer questions, and the resulting 6-6 tie vote on the Committee means the Governor’s emergency rule is now in effect. What does it mean for business owners in Illinois?

Governor’s new rule could be used to impose heavy fines on businesses that do not enforce face-covering requirement.

The controversial new emergency rule was filed by the Illinois Department of Public Health (IDPH) on Friday, August 7, and went into effect immediately.  The rule directs local health officials – police officers, health departments, and parallel offices – to send out written notices and warnings to businesses that allow employees or customers to violate the COVID-19 facial covering emergency public health orders.  The written statements will issue strong advice to the recipient, and will state that failure to comply with the orders could result in the recipient being charged with a Class A misdemeanor.

If a recipient of a written notice or warning is seen by local health law enforcement as not responding to the notice, the name of the recipient place of business can be referred to the local state’s attorney for further action.  A business entity found guilty of a Class A misdemeanor may be sentenced to pay a fine of up to $2,500.  Furthermore, should a small business be charged with multiple violations of the facial-covering orders, multiple fines could be imposed.  Many questions have been raised about the wording of the new rule and the policy behind it.  Local health officials can be expected to enforce this new rule in different ways, and there is not likely to be consistent enforcement throughout the state.  The Illinois Policy Institute, which disagrees with the rule, describes it as treating businesses as criminals.

The IDPH rules went before the General Assembly’s Joint Committee on Administrative Rules (JCAR) for scrutiny on Tuesday, August 11.  At the JCAR meeting, all three House Republican members of the committee described serious problems that they had heard from their constituents about the new rule, and appealed to their colleagues to join with them in a motion to suspend the troubled edict.  The House Republicans stated they were not opposed to face coverings, but wanted the State to develop and implement a workable rule that will be widely obeyed throughout the state.  Six of the eleven members present in the committee voted for the motion.  However, a loophole in State law required that Rep. Reick’s motion get the “yes” votes” of a three-fifth’s supermajority of the Joint Committee, or eight members.  The motion was not adopted, and the rules continued in place.

JCAR was busy on Tuesday. The Committee, made up of a bi-partisan group of 12 House and Senate Republicans and Democrats is the Committee charged with approved administrative rules.

One of their tasks this year was to decide whether to uphold Governor Pritzker and the Department of Commerce and Economic Opportunity’s proposed rules for how the $250 million in Federal aid would be distributed to communities large and small throughout Illinois.

The Committee upheld DCEO’s plan for distributing funding to local government units. The Illinois Municipal League opposed the Governor’s proposal because under the Governor’s rules, badly needed funding will not make it to small businesses most devastated by the pandemic.

First Round of Business Interruption Grants (BIG) Awarded to Businesses

Grants given out during the first round of the Businesses Interruption Grant (BIG) program will help Illinois small businesses in communities hardest-hit by COVID-19 related closures.

The Department of Commerce and Economic Opportunity (DCEO) launched the first round of BIG, dedicating $60 million for businesses experiencing losses or business interruption as a result of COVID-19 related closures.  BIG funding may be used to help businesses with working capital expenses, including: payroll costs; rent; utilities; and other operational costs as defined in the eligible cost list found below.

The first round of funding awards grants to over 2,600 businesses located in every region of the state, with grants ranging from $10,000-$20,000. BIG round 1 grants span a diverse geography, as well as business type – with approximately 40 percent of all awards going to minority-owned businesses. Eligible businesses for this first round funding included restaurants/bars, barbershops/salons, gyms/fitness centers, and small businesses located in severe economically distressed communities.

DCEO will release additional BIG grants for small businesses in future rounds of funding. Future rounds will give consideration to additional business sectors facing COVID-19 related closures or diminished operating capacity. As required by statute, BIG funding will continue to allocate a certain amount of funding for businesses in disproportionately impacted areas, or “DIAs,” which are areas that have been significantly impacted by COVID-19 and economic stresses. Separately, an additional $270 Million of the BIG program is set aside for childcare providers.

I am happy to report that businesses in the 104th district received $160,000 in BIG grants the first time around. These $10,000 and $20,000 grants are helping businesses from the YMCA to the local bait shop deal with the financial hardships brought on by the pandemic.

To see the entire list of grantees, please visit https://www2.illinois.gov/dceo/SmallBizAssistance/Documents/BIG-Round1Awardees_08.12.20.pdf

Another Day, Another Illinois Democrat Indicted

Yet another Illinois Democrat has been indicted as part of an ongoing and sweeping Federal investigation into public corruption in Illinois. This week,

Sen. Terry Link was indicted on tax evasion. The charges against Link say he lied about his income on his tax returns. Link is rumored to be the State Senator at the center of a bribery scheme involving disgraced and now former State Rep. Luis Arroyo, who has admitted to bribing a state senator for the movement of legislation that would allow for the legalization sweepstakes gambling machines in Illinois.

These facts have been known since Arroyo’s arrest in 2019. Since then, State Senator Martin Sandoval was raided and pled guilty to multiple federal charges.

The most recent shoe to drop in the long and winding road that is corruption among Illinois Democrat officials, House Speaker Michael Madigan is implicated in a Federal deferred prosecution agreement involving energy giants ComEd and Exelon.

A growing probe by federal law enforcement has targeted an increasing number of members of both chambers of the Illinois General Assembly – including individuals at the very top of the legislature’s leadership.  In action this week, longtime state senator Terry Link was formally charged with income tax evasion and filing a false tax return.

State Representatives Grant Wehrli and Patrick Windhorst, who serve on the Joint Commission on Ethics and Lobbying Reform, are offering their reaction to a press conference held by Illinois State Senate and House Democrats touting a “new” package of ethics reform legislation.

“Senator Manar actually said the Joint Commission on Lobbying & Ethics Reform is working hard, when in truth, we haven’t met since March 5th! We haven’t met in person and we haven’t met on Zoom. Other state committees, commissions and panels have met multiple times since early March, but the Joint Commission on Lobbying & Ethics Reform has not. We did not finalize our work and we did not finalize our report,” said Rep. Wehrli. “Today’s press conference was completely out of touch with the reality on the ground. Every House member that took part in today’s press conference voted to put Mike Madigan in the Speaker’s chair and voted to accept his Rules of his House. While I applaud those who went on the record again today saying the Speaker should resign, this is merely political theater and window dressing. Until these members demand that the Governor call a special session to address ethics legislation and take real steps to remove Mike Madigan as Speaker, this is all just political cover.”

“I think Rep. Wehrli and I were well ahead of our colleagues in asking for the Ethics Commission to resume its work. We haven’t met since March,” Windhorst said. “Many of the legislative fixes proposed by House and Senate Democrats today have been introduced in bill form since November 2019. I just wonder where they have been. Corruption in Springfield has been rampant, and the House Speaker is implicated in a serious scheme involving bribery for taking official action. I believe we should return to Springfield in a Special Session to address the state’s serious plague of public corruption.”

On July 24, the Republican members of the General Assembly serving on the Joint Commission on Ethics and Lobbying Reform issued a letter to the co-chairs of the Commission requesting to meet to finish its work and finalize its report that was due at the end of March.