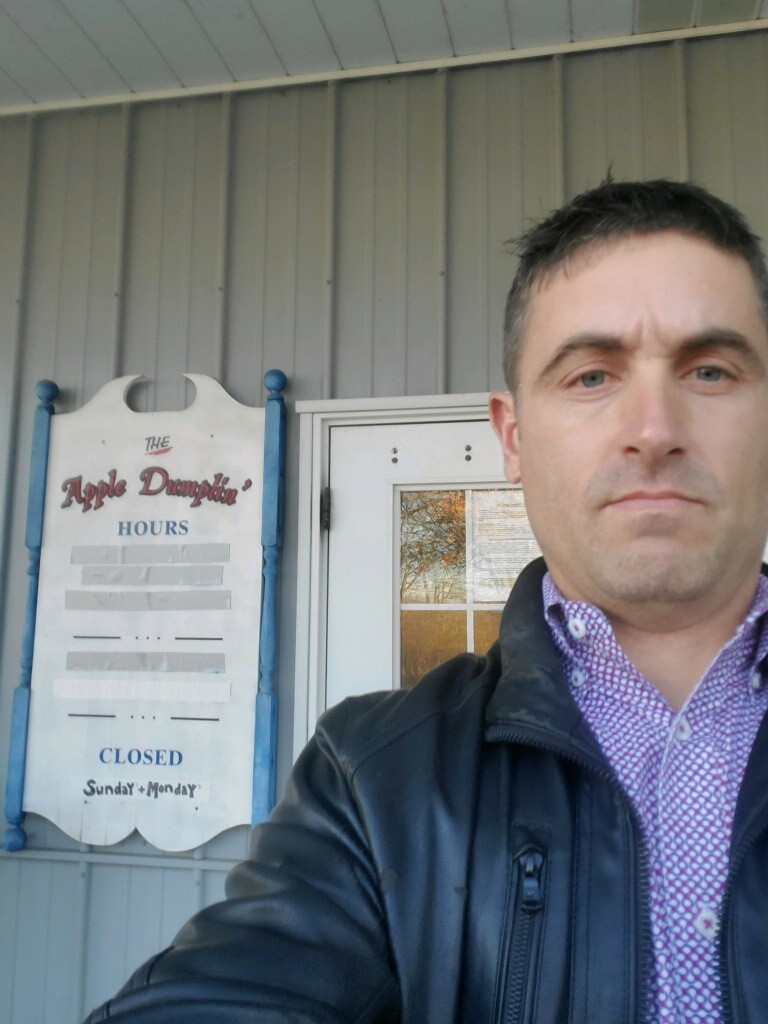 Back in the summer of 1997, I was home from college working a summer job.  I landed a job on the mowing crew for the Urbana Champaign Sanitary District. I was working hard and saving money for the next semester of school and any left over money went to feed my rodeo habit whenever I got the chance.  One of my supervisors loved a restaurant just outside of town close to a property that we had to mow.  It was called the Apple Dumplin’, which is a great little restaurant that served home cooked meals just like my Mom used to make.  They always had a great breakfast and the best fried chicken I have ever had at a restaurant.  The place was always immaculately clean and the staff friendly.  Every time I worked with that particular supervisor, we ate lunch at the Apple Dumplin’ and I grew to love this little gem about as much as he did.

After college, I came back home to work with my Dad on the family farm.  In 2003, we were lucky enough to rent a nice farm located just outside of Urbana that we still farm to this day.  The farm happens to be a few short miles down the road from the Apple Dumplin’.  Twice a year, every year for the last 17 years we have religiously treated the farm crew to lunch at the Apple Dumplin’. We go there to celebrate the spring planting and the fall harvesting at our Urbana farm.  There is no better way to treat the hard-working farm crew that helps us get our work done in a timely manner. A great tradition that provides everyone with a nice reprieve from the cold bologna sandwiches in our lunch boxes. It is something everyone looks forward to every year.

I had an affinity for this restaurant long before I met the owners, but that appreciation has grown since I was able to meet Jim and Kathie Flaningam.  Jim and Kathie are everything this Country and this State used to be about.  They were married shortly after high school and a family came soon after.  They both worked multiple jobs to pay the bills, put food on the table, and to save for a better life.  Hard work is a way of life for these two.  Still to this day, in addition to running the restaurant, Jim works as a maintenance man for the Champaign Public Schools.  In 2008, the Flaningam’s scrapped together enough money and by investing almost all their life savings were able to purchase the Apple Dumplin’.  Jim told me about the weight that fell on his shoulders when he realized the payroll was due two weeks after he bought the restaurant, which took the rest of their money before they made it through the first month.

Jim and Kathie have worked hard since they bought the restaurant and have made it a success.  They were frugal and saved money away for a rainy day. This has helped them get through this very tough time.  When the Governor shut the State down last spring and stopped indoor dining, Jim and Kathie were able to survive on their savings.  Their employees were another matter.  The restaurant employs 19 people.  Most of them fully relying off the tips they make working at the Apple Dumplin’ and for some it provided a needed second job.  The shutdown and subsequent layoffs were a crisis for many of the employees.  We forced these hardworking people to uproot their financial security and promised them the needed assistance. The State of Illinois failed them with the completely unreliable IDES system.  Despite all of this, Jim and Kathie’s employees stuck by them.  As a result, Jim made them a promise that he would not shut down ever again and if events were repeated, he would not go down without a fight.

That fight has arrived.  Governor Pritzker recently put us back under his tier 3 mitigations, which falls squarely on bars and restaurants.  These small businesses continue to be singled out as one of the main scapegoats for the Governor’s mitigation plan.  It makes no difference that an unlimited number of people can stand in line at a Walmart or Meijer during the pandemic, or that there are hundreds of people shopping in the malls and retail stores in the Champaign Urbana area, but we see restaurant owners singled out.  People like Jim and Kathie continue to bear the brunt of the Governor’s unilateral policies.

The dirty little secret is that Illinois has no ability to enforce these orders.  The Governor would have to ask JCAR to implement his rule banning indoor dining.  To this day, the Governor has only asked JCAR to rule on a 50-person indoor limit.  In other words, the Governor is bluffing and relying on local health officials to do his dirty work.  As you can imagine this leads to a very disjointed COVID response and ultimately dooms any effort at mitigation.  Even if county health departments had a unanimous desire to enforce the Governor’s orders, which they don’t by a long shot, certain counties have more resources and staff available than other which creates a very uneven enforcement of the mitigation rules.  In my own district, my two health departments have extremely different approaches to enforcing mitigation efforts.  In effect, you are asking business owners and employees in areas like Champaign County to sacrifice themselves in an effort that is doomed to fail.  This is completely unreasonable.

The Champaign Urbana Public Health Department (CUPHD) has been throwing their weight around trying to intimidate small restaurants citing a very ambiguous ordinance that allows scary levels of authority in the name of public health.  This is resulting in hard working business owners and their hard-working employees to suffer.  CUPHD is working hard to be the Grinch that steals Christmas for many employees who depend on these paychecks the department is taking away.  This process needs to stop. Any public official in Champaign County thinking it is ok for the government, state or local, to destroy the livelihoods of citizens, need to hear from as many people as possible letting them know nothing about this process is all right. I encourage everyone to reach out and make your voice heard.