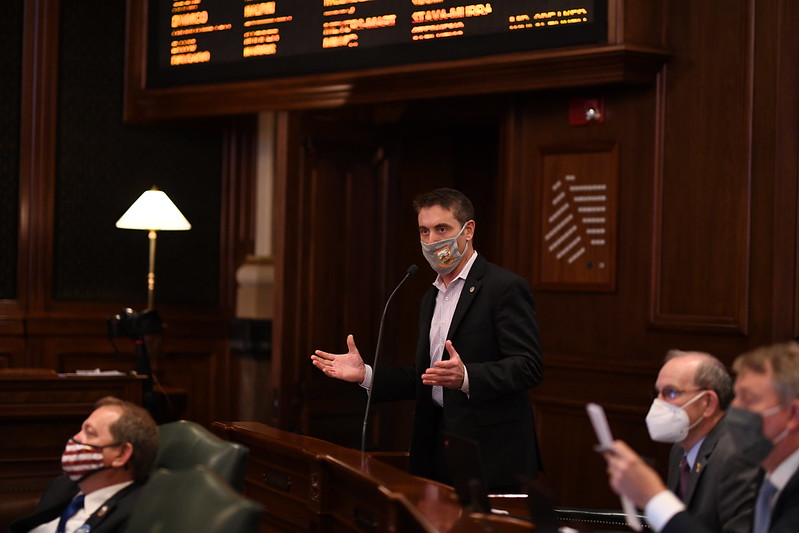 SPRINGFIELD…. State Representative Mike Marron(R-Fithian) voted no on the Budget Implementation Bill (BIMP) and the FY 2022 budget, citing a third year in a row of Republicans not being involved in the budget process.

Rep. Marron said, “Unfortunately, the new day in Springfield promised by Speaker Welch turned into Madigan’s playbook really fast this past week. Our caucus introduced a package of meaningful reform bills earlier this year, but of course, the new Speaker did not bring these proposals to the House floor.

“The people of Illinois deserve transparency in their state government and budgeting process. These reforms aim to end the behavior that has brought dozens of corruption charges against public officials, tarnishing the people’s trust in this institution,” said Marron.

Rep. Marron said, “The Democrats final budget was not filed and presented to the chamber until 11:50 p.m. the last night of session. This is the third year in a row I have seen this important process corrupted by a lack of transparency and good governance.”

“The Democrats added pay raises for legislators, nearly doubled their district allotment amounts, removed all of the fiscal impact notes on all of their bills, and continue to run a deficit adding more taxes on the backs of hardworking Illinoisans,” said Marron.

Rep. Marron said, “Millions of Americans made immense sacrifices for the past 14 months to get through this pandemic, but Speaker Madigan sat back as Governor Pritzker used an unchecked executive authority. Madigan and Welch had the opportunity to use the legislature as a check and balance to the Executive branch, but they allowed us to sit back instead of working towards bi-partisan solutions in Springfield.”

Rep. Marron said, “What we are seeing today is a huge disappointment for many reasons. The process of passing sweeping partisan legislation in the middle of the night away from the people and the press is appalling. There were so many failed promises made by members of the Majority party, and I wonder if we will ever see a new day in Springfield.”