Rep. Marron Decries out of Control Violence, Calls for Greater Transparency in Springfield 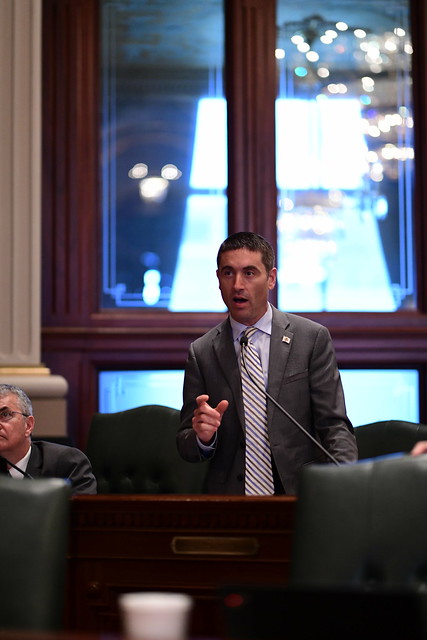 Following the most recent outbreak of violence and lawlessness that erupted in Chicago over the 4th of July weekend, I wanted to take a moment to address police reform legislation and the overwhelmingly negative language and attitude displayed toward our brave police men and women that wear the uniform and go to work to protect our communities every single day.

The process for bringing sweeping criminal justice reform and police regulation legislation to the floor of the House was an extreme perversion of how we should come to consensus to pass bills in this General Assembly.

The so-called “Safe-T” Act, passed along party lines back in January’s lame-duck Session, and a follow up “trailer bill” that aimed to fix major flaws in the underlying bill, was crafted through Zoom meetings and secret negotiations between members of the Democratic Party with little to no input from Republicans and law enforcement.

Former Speaker Madigan created this process to suppress the public from viewing bad bills until it was too late. Speaker Welch replicated this process during his first session, even though he claims we entered a, “New Day” in Springfield as he took the Speaker’s gavel.

I believe major legislation that aims to alter the very foundation of policing in our communities must come from bipartisan consensus with support from law enforcement groups and stakeholders alike. That did not happen in the originally passed Safe-T Act that is now law. The trailer bill that was supposed to fix fatal flaws in the legislation passed in the final hours of the spring 2021 Session that wrapped up on June 1.

I support the police, and believe the vast majority are concerned with protecting our cities, streets, and neighborhoods from violent crime. I don’t join those who rush to immediate judgment with police officers make split-second life and death decisions in the heat of the moment.

I believe it is best to wait for evidence to come out before jumping to conclusions, to collaborate and build consensus, and allow a free press to do its job. This has not happened in Springfield for two decades. Speaker Madigan brought this absolute power and cronyism to unheard of levels. A new day in Springfield is far from what I happened the last three months of the spring 2021 Session.

In January 2021’s lame-duck Session, Democrats proposed and rammed through major omnibus pillars of the legislative black caucus agenda in the wee hours of the evening. They removed the fiscal impact notes on these pillars so we would not know the cost to taxpayers. The so-called police reforms create hundreds of new regulations and mandates on law enforcement, but fail to bring any meaningful reforms to reduce crime or help criminals change their behavior. After one of the most bloody and crime-ridden years the city of Chicago and our state has seen, there is no denying that crime has reached epidemic levels in Illinois.

Our caucus stands united to work with the majority party to bring positive change to Illinois, but police reform passed and sign in to law during 2021’s lame-duck and regular legislative sessions does nothing to eliminate or reduce these spikes in crime.

I firmly believe that inflammatory, negative rhetoric against law enforcement and added barriers for them to conduct their jobs will make us all less safe. Springfield is failing the citizens when Democratic politicians do not listen to opposing viewpoints or even allow the citizens to have a chance to weigh in on their government. This must end immediately. We have so much work to do to help our constituents and I am ready to get to work.

This corrupt system will continue unless the new Speaker takes responsibility for promises made to voters and own up to the failure to keep those promises. It is time for Illinoisans to wake up, and I sincerely hope my Democratic colleagues decide to say enough is enough.

America is in a spiral of divisive politics rooted in unchecked power and unfulfilled promises.

Our citizens deserve a fair chance to pursue peace, security and happiness, but we continue to allow crime and corruption to run rampant in Illinois. Our state and this country needs its elected officials to stand together and put aside differences and collaborate to find solutions to make our communities safer for all people.